Monywa – Home of the Giant Buddhas

Monywa is a city in Sagaing Region, 135 km (about 4-hour drive) northwest of Mandalay on the eastern bank of the Chindwin River. Monywa is an economic hub for agricultural products such as beans, oranges, lentils and other products such as palm sugar, cotton and flour. It has a very strategic market position since it is the gateway to the west bank of Chindwin and Irrawaddy, and it also has access to India via the Chin hills.

With regards to tourism, Monywa is still little known to travelers. It is rather a stage city between Mandalay and Bagan. However, if you’re Buddhist follower, or love the beauty of Buddhism architecture, it would be a big miss if you pass Monywa- home of the giant Buddhas. A trip to Monywa allows you to visit these following beautiful sites: 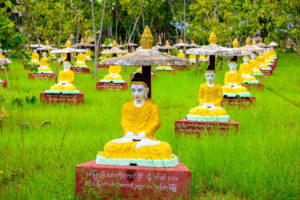 On a nearby hill of the Thanboddhay pagoda stands a 130-meter-high Buddha erected on a base of 13.5 meters, visible from afar. Its construction began in 1996 and ended in 2008. It claims to be the tallest Buddha in the world. It is also a building with prayer rooms adorned with amazing frescoes on different floors. An elevator takes you to the top of the giant Buddha, to admire the panoramic view. Next to it, you will see another statue of Buddha which is equally impressive for its size but the statue is portrayed in reclining posture. It measures 98 meters long and 19 meters high. 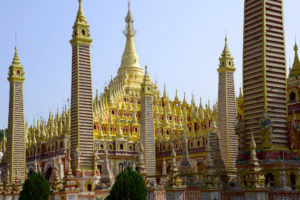 Fifteen kilometers south of Monywa stands the Thanboddhay Pagoda whose architecture bears significant resemblance to that of Borobudur (Indonesia). Its multicolored facades enthrall you at first glance. This pagoda was built in 1303 but has been restored multiple times. The complex is consisted of a magnificent stupa with a height of 43 meters, surrounded by many smaller but colorful multiple-storey stupas.

The current building dates from 1939 and houses an impressive number of Buddhist statues, totaling 582,257! A small tower allows men to enjoy the view of the pagoda, women are forbidden from this activity! 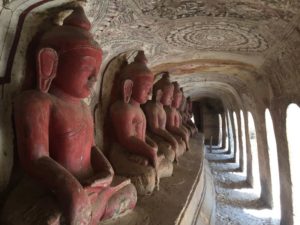 An exceptional archaeological site about forty kilometers west of Monywa. The site includes a row of 492 caves carved between the 14th century and the 18th century in the limestone and transformed into temples dedicated to Buddha. The caves are home to nearly 2,600 statues, some of which are still covered with lacquer. The walls and ceilings are covered with beautiful cave paintings, among the richest in South Asia. The site is inhabited by a hundred monks to protect statues from looters. It’s a beautiful place to see.

The journey from Monywa can be by boat and by car.