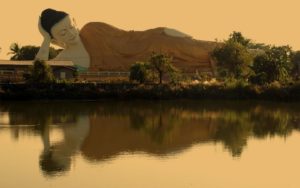 Bago (formerly Pegu) was the royal capital Mon from the fourteenth to the sixteenth century and an old port city that was very prosperous for almost 300 years. Former capital of the powerful kingdom of Hanthawaddy, it was transformed into a fortified town and is still surrounded by the ruins of the old city wall and moat which formed a square 2.5 kilometers aside. Today, Bago still a lively town whose activity is based mainly on trade of dried rice and fish sent to the rest of the country.

Far from mass tourism, Bago is a recommended destination for travelers in search of tranquility and calmness. Note that this city is one of the emblems of the country to Buddhism. Bago’s abundance of religious sites: blissed- out Buddhas, treasure- filled temples are enough to your interest.

It has many famous religious sites. Here are some of them: 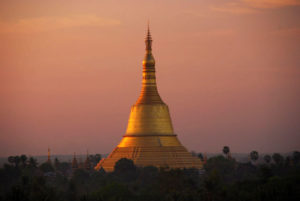 One of the most revered pagoda in Burma. The golden stupa which has a history of more than 1000 years dominates the city from its 114 meters high, it is higher than the Shwedagon in Yangon. Legend says it contains two hair strands of the Buddha Gautama. Built by the Mon in 825, it was badly damaged by an earthquake in 1930, and its restoration was completed in 1954. 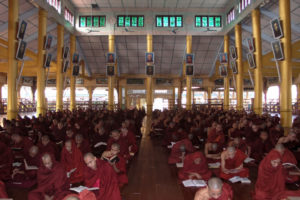 One of the largest monasteries of Myanmar, with over 1,000 monks studying there. Every morning when they go to the pagoda, their silent procession is impressive. From 10am, donors can provide them with food. But the attraction of Bago, it is the meal of the monks. At 10: 30, when they hear the bell, they head in silence towards the refectory, you can even attend their lunch. The afternoon is devoted to the study; we hear them read and recite aloud.

It houses a reclining Buddha, the oldest of Myanmar, which was recovered and restored in the 19th century. It is highly revered by the Burmese. It is 55 meters long and 16 meters high, his toes were almost 2 meters … The pillow is made of richly decorated boxes of glass mosaics. Another giant lying Buddha is located outside of the pagoda.

How to get there

Bago is located 80 km (about two hours) northeast of Yangon, on the road from Golden Rock. The tour can be done in a day trip from Yangon.