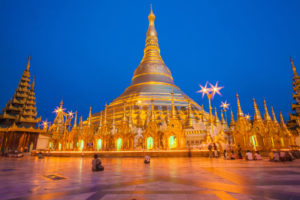 Yangon, The Former Capital of Myanmar

Yangon is located south-west of the river of the same name, 30 kilometers of the Andaman Sea. Originally a small village named Dagon located around Shwedagon Pagoda, it was subject to its first major change in the conquest of central Myanmar by the king Alaungpaya in 1755. He named it Yangon (“end of combat”) and developed its port to convert it to number one in the country. The British changed the name in 1886 during the annexation of Burma; Yangon then became Rangoon. In 1989, Rangoon was officially renamed Yangon, its original name, by the military junta.

Becoming former capital since 2005,  Yangon still be the largest city of Myanmar and plays the most important role in the economic life.

Yangon is nicknamed “the Garden City of the East” because of its lush tropical vegetation, its shady parks and beautiful lakes. This city is one of the main tourist attractions in Burma, drawing travelers with the quaint charm of its colonial buildings coexisting with numerous pagodas. Many people call Yangon “the city of a thousand golden pagodas” . On the other hand, it exudes an atmosphere characteristic of a big city with its many busy streets, lined with shops and markets.

We present some main attractions: 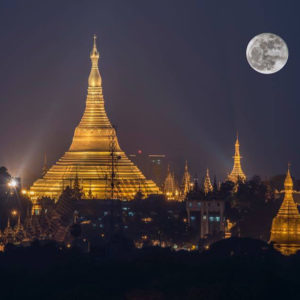 Literally, “Shwe” means gold, and “Dagon” is the former name of Yangon. Symbol of the former capital, Shwedagon on Singuttara Hill is the most remarkable stupa of Burma with its overwhelming height of 99 meters. Built more than 2,500 years ago, Shwedagon Pagoda is said to house the relics of four Buddhas, including eight hairs of Gautama Buddha. About 60 tons of gold covering the pagoda with its peak, about 7,000 precious stones, diamonds, rubies, sapphires contained in her parasol.

Shwedagon is widely regarded as the largest and most revered religious place for the Burmese. We could stay there for many hours to see the Burmese praying and placing their offerings. Most visitors are very touched by the mystical atmosphere of the place.

At sunset, the illuminating pagoda in the dark offers a unique and fascinating scene.

This pagoda is famous for its impressive statue showing the Buddha in a resting position.Measuring 70 meters long, it is one of the longest lying Buddha in Myanmar and the world.

He wears a crown inlaid with precious stones. His soles carries 108 distinctive , and beautifully drawn, marks (lakshanas) of Buddha .

Like most pagodas in Myanmar, the Chaukhtatgyi Pagoda is surrounded by 8 planet altars, one for each day of the week, including two for Wednesday. Several Buddhist monasteries are located nearby.

More than half a century after the independence of Burma, many colonial buildings still bear witness to the greatness of the British Empire. The best way to see them is to walk along the Strand Road and stroll down the Pasodan street. You will be surprised by the large shaded alleys where the houses are decorated in the unique style of the Burmese colonial times. Large centennial buildings dot the city, proud of their beautiful architecture and witness to a bygone era.

Kandawgyi is one of two lakes in Yangon (the other is Inya). It is located downtown, just east of Shwedagon Pagoda. The bank of the lake is suitable for a small walk on the wooden bridge that stretches along the lake shore. It provides access to a view on the beautiful Shwedagon Pagoda and the Royal Hall Karaweik which sits majestically on the lake. 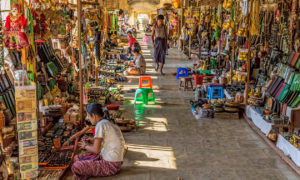 Bogyoke market is also known as colonial Scott Market. Built by the British in 1926, it was first named in honor of James George Scott, a famous official especially for having introduced football in the country. It was renamed after independence in 1948 in honor of Bogyoke Aung San. This covered market is home to many shops and is renowned for its many jewelers, tailors and beautiful fabrics. Besdie handicrafts, many vendors offer lacquerware, puppets, paintings by local artists and other souvenirs. This is one of the attractions not to miss in Yangon. 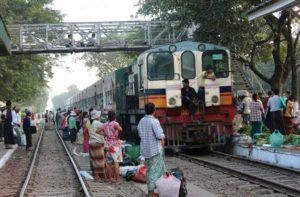 Built by the British in 1954, the Yangon Circular Train covers a 45.9 km loop and stops at 39 stations. It takes three hours to go through the loop. From the central station south of the city, trains run in both directions.

The cars are old and ramshackle but it’s the perfect way to experience the authentic Yangon, exchanging glances and smiles. Amid the Burmese who go to work and street vendors, you will discover the daily life of the inhabitants of the suburbs of Yangon. The train passes through residential areas and paddy fields surrounding the city.