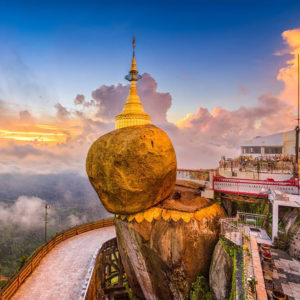 Golden Rock – an important religious site of Myanmar is seemingly defying the law of the gravity. Posed in balance surprisingly at 1200 meters, this huge rock of 6 meters in diameter wears a small stupa of 7.3 meters in height which was covered with thousands of sheets of gold leaf by pilgrims over years.

It is hard to answer how this boulder keeps its balance, but the pagoda has been here for 2500 years. According to legend, it’s kept in place by a hair of the Buddha. The legend says the Buddha himself gave a strand of his hair to a hermit called Thaik Tha. The hermit decided to notify the king about it and asked him to build a temple to enshrine the Buddha’s hair. The king found a rock in the shape of hermit’s head at the bottom of the sea, and then transported it to the perfect location (as it’s now). 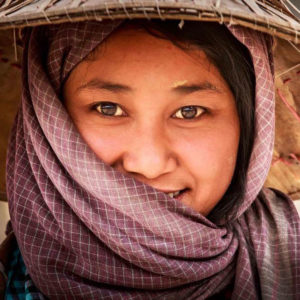 From Kinpun- the base camp of Kyaikhtiyo, travelers have to use open-top trucks to reach its peak through a winding road about 15 kilometers. Now the trucks stop near the summit, and you only have to walk a few minutes to get to the Golden Rock. The 45- minute trucks ride is pretty special experience. Sitting on the strips on the back of the trucks, people will be impressed by the special serenity of the landscapes and the mythical atmosphere on arrival at the top. It is possible to hike to the top of the mountain from Kinpun, which takes longer time- around 5 hours.

The pagoda offers a spectacular view of all sky, sea, mountain and pagoda. People believe that it is a magic if can touch the boulder, therefore they try to touch once when come here. However, women don’t have the right to touch the rock, or to approach. 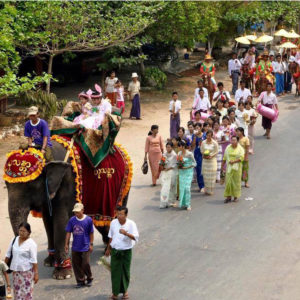 Traveling to the Golden Rock, it’s easy to get to Kyaikhtiyo Wildlife sanctuary, a perfect destination for ecotourism, birds watching and trekking. Covering 180 square kilometers, this sanctuary is home to 98 species of birds, of which the highlights would be Great Hornbill, Kalij Pheasant, Blue-throated Barbet, Pin-tailed Green Pigeon, Oriental Pied Hornbill, Black Bulbul, Rufous Woodpecker… In this area, other mammals such as goral, gaur, Sambhur/ Hog/ Barking deer, Monkey… may be viewed.

If you have time, visit to the mysterious Kyaikpawlaw Buddha Image, which is well-known because of the living mole on the face of the Buddha. There are some astonishing facts about this image that: the eyes of the image are lively; even moved by elephants, horses, and men, the image is stand still; it is said to be floating on water; the mole on the Buddha’s face is covered with gold leaf many times, but it never fades away.

Golden Rock- an important religious site is one of greatest destinations in Myanmar for not only Buddhist but also for ones who love sightseeing.  The fervor of the pilgrims, the atmosphere, the smells of incense, all will take you in the authentic Myanmar.