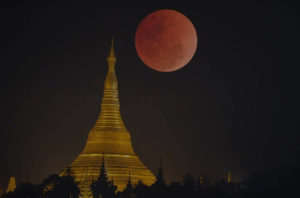 Shwedagon Pagoda is the most sacred Buddhist pagoda in Myanmar, as it is believed to contain relics of the four previous Buddhas of the present kalpa. These relics include the staff of Kakusandha, the water filter of Koṇāgamana, a piece of the robe of Kassapa, and eight strands of hair from the head of Gautama.

Historians and archaeologists maintain that the pagoda was built by the Mon people between the 6th and 10th centuries AD. However, according to legend, the Shwedagon Pagoda was constructed more than 2,600 years ago, which would make it the oldest Buddhist stupa in the world. According to tradition, Tapussa and Bhallika — two merchant brothers from the north of Singuttara Hill what is currently Yangon met the Lord Gautama Buddha during his lifetime and received eight of the Buddha’s hairs. The brothers returned to Burma and, with the help of the local ruler, King Okkalapa, found Singuttara Hill, where relics of other Buddhas preceding Gautama Buddha had been enshrined. When the king opened the golden casket in which the brothers had carried the hairs, incredible things happened:

The stupa fell into disrepair until the 14th century, when King Binnya U (1323–1384) rebuilt it to a height of 18 m (59 ft). A century later, Queen Binnya Thau (1453–1472) raised its height to 40 m (131 ft). She terraced the hill on which it stands, paved the top terrace with flagstones, and assigned land and hereditary slaves for its maintenance. Binnya Thau yielded up the throne to her son-in-law Dhammazedi in 1472, retiring to Dagon. During her last illness she had her bed placed so that she could look upon the gilded dome of the stupa. The Mon face of the Shwedagon inscription catalogues a list of repairs beginning in 1436 and finishing during Dhammazedi’s reign. By the beginning of the 16th century, Shwedagon Pagoda had become the most famous Buddhist pilgrimage site in Burma.

A series of earthquakes during the following centuries caused damage. The worst damage was caused by a 1768 earthquake that brought down the top of the stupa, but King Hsinbyushin later raised it to its current height of 99 m (325 ft). A new crown umbrella was donated by King Mindon Min in 1871 after the annexation of Lower Burma by the British. An earthquake of moderate intensity in October 1970 put the shaft of the crown umbrella visibly out of alignment. A scaffold was erected and extensive repairs were made.

From 22 February 2012 to 7 March 2012, devotees celebrated the annual Shwedagon Pagoda Festival for the first time since 1988, when it was banned by the governing State Law and Order Restoration Council. Celebrations began at the Rahu corner of the pagoda’s yinbyin platform, at the Maha Pahtan and Aung Myay central platforms, at 9 am. on 22 February. The Shwedagon Pagoda Festival, which is the largest pagoda festival in the country, begins during the new moon of the month of Tabaung in the traditional Burmese calendar and continues until the full moon.

The pagoda is listed on the Yangon City Heritage List.

The stupa’s plinth is made of bricks covered with gold plates. Above the base are terraces that only monks and other males can access. Next is the bell-shaped part of the stupa. Above that is the turban, then the inverted almsbowl, inverted and upright lotus petals, the banana bud and then the umbrella crown. The crown is tipped with 5,448 diamonds and 2,317 rubies. Immediately before the diamond bud is a flag-shaped vane. The very top—the diamond bud—is tipped with a 76 carat (15 g) diamond.

The gold seen on the stupa is made of genuine gold plates, covering the brick structure and attached by traditional rivets. People all over the country, as well as monarchs in its history, have donated gold to the pagoda to maintain it. The practice continues to this day after being started in the 15th century by the Queen Shin Sawbu (Binnya Thau), who gave her weight in gold.

There are four entrances, each leading up a flight of steps to the platform on Singuttara Hill. A pair of giant leogryphs guards each entrance. The eastern and southern approaches have vendors selling books, good luck charms, images of the Buddha, candles, gold leaf, incense sticks, prayer flags, streamers, miniature umbrellas and flowers.

Another replica of Shwedagon Pagoda, 46.8 m (154 ft) in height, was constructed at Lumbini Natural Park in Berastagi, North Sumatra, Indonesia. Completed in 2010, the construction materials for this pagoda, were imported from Myanmar.

Planetary Post at the Shwedagon Pagoda
Scroll to top